Galaxy Zoo: Clump Scout – a first look at the results

Galaxy Zoo: Clump Scout – a first look at the results 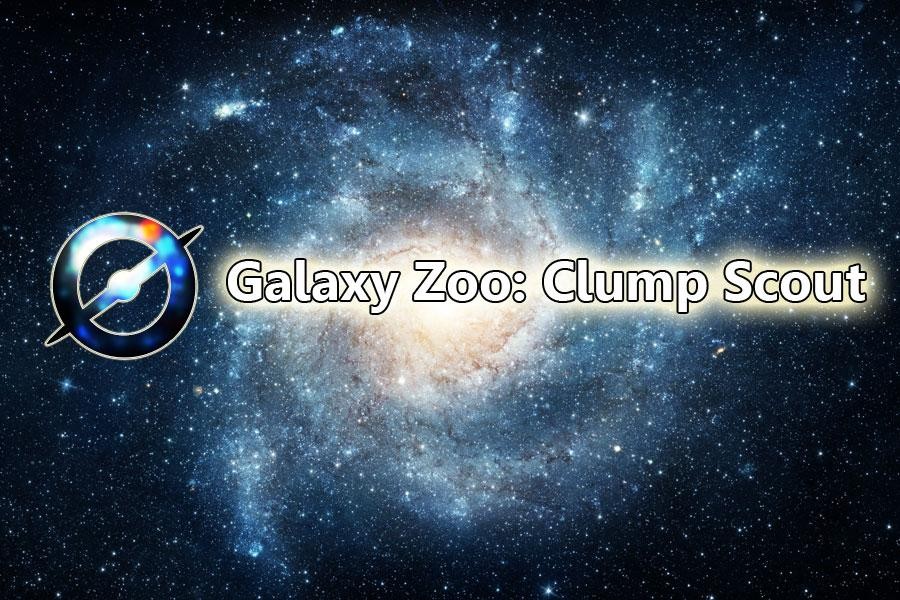 Great news from ESCAPE's first Citizen Science Project: Clump Scout! Since launching Clump Scout in September 2019, over 7,000 volunteers have provided more than 800,000 classifications! It has been exciting to explore the data as it has been coming in to learn more about clumpy galaxies in the local universe.

Since around the halfway point with this project, a few things were learned so far. There is a new set of local clumpy galaxies to examine more closely.

Figure 1: A small sample of clumpy galaxies near us. These are some of the galaxies for which we’ve requested follow-up observations by the Hubble Space Telescope.

A major goal of the Clump Scout project was to find a group of local galaxies that were “clumpy”. Clumpy galaxies, they’ve mostly been considered a “high-redshift” phenomenon — which is astronomy-speak for “very far away and very long ago”. In fact, the first clumpy galaxies were discovered by examining images of the very distant universe taken by the Hubble Space Telescope. Because these galaxies were so far away, their light took billions of years to reach us, and we were seeing them as they existed when the universe was only a fraction of the age that it is now. It quickly became clear that most early-universe galaxies did not look like local galaxies, and the “spiral” or “elliptical” structure that we’re used to seeing was mostly absent. Instead, most galaxies were loosely-structured blobs of stars and gas with a few concentrated “clumps” that glowed brightly with new stars. The name “clumpy galaxy” originated to explain the appearance of these galaxies, and to differentiate them from the appearance of galaxies near us.

Unfortunately, because these galaxies are so distant, it’s difficult to study them in detail. Scientists have wondered over the years if there are properties of clumps that are being hidden or washed-out by the dim, low-resolution photos taken from billions of light-years away. This is why the discovery of clumpy galaxies in our own backyard is such an exciting accomplishment. Thanks to the volunteer classifications from the Clump Scout project, it has been possible identify hundreds of galaxies with clumpy characteristics much like the much more distant versions we’re used to studying — but since they are nearby, it is possible to perform follow-up studies with more sensitive, higher-resolution techniques. Recently, a proposal was submitted for observation time from the Hubble Space Telescope to examine some of these galaxies in more detail. Above, you can see ten of the galaxies for which we requested follow-up. They are dotted with blue specks, which are the “clumps” we’ve been seeking to study.

It’s much harder to see clumps in some places than others.

The Galaxy Zoo team has run many projects that study the large-scale properties of galaxies, such as their shape, characteristics, and patterns in their behavior. The Clump Scout project is a bit different because its focus is on a much smaller target. Clumps are small “substructures” within galaxies, which are much harder to see and in many cases can be entirely missed.

Part of the job during this project was to determine the properties of clumps that Clump Scout volunteers could see compared to the properties of those that they couldn’t. For example, a bright clump in a dim galaxy sticks out like a sore thumb; a dim clump in a bright galaxy, on the other hand, might be completely invisible. To control this effect, it was created a sample of simulated clumps with properties we already knew well, and inserted these into some galaxy images in the project. Now that so many volunteers have responded, there is a good idea of which simulated clumps can be seen and which cannot — which gives a very good idea of what sorts of real clumps might be missing as well.

The main factor controlling whether or not a clump is visible is, of course, how bright it is. Volunteers have shown that it is possible to catch just about all of the clumps that are above the “95% completeness limit” of the Sloan Digital Sky Survey (SDSS), the survey which provides all of Clump Scout’s images. Essentially, this means that if a clump CAN be found, volunteers all are finding it!

Other factors controlling clump visibility were more surprising. For example, it was expected expected that the higher an image’s resolution, the easier it would be to see clumps. In fact, resolution appeared to have almost NO effect on volunteers’ ability to see clumps: Volunteers recovered the same fraction of clumps in the clearest images as in the blurriest ones. Aside from the clump’s brightness, the most important factor in clump recovery was actually its proximity to the center of its host galaxy. It seems that clumps in the dimmer, more outlying regions of galaxies are quite easy to see — they are bright spots on a dim background. However, once they are within one “effective radius” of the galactic center, they become incredibly difficult to identify. This makes sense: The galactic center is much brighter and may drown out the signal of a clump near it. This gives us a very helpful tool for understanding the patterns in clumps we are seeing. Many theories about clumps predict that they live for billions of years, beginning near the outside edges of their host galaxies and slowly migrating inward towards the center before merging with the central bulge. It is not likely to see clumps near the central bulge in our Clump Scout data, but it’s not necessarily because they’re not there: They are merely harder to see. 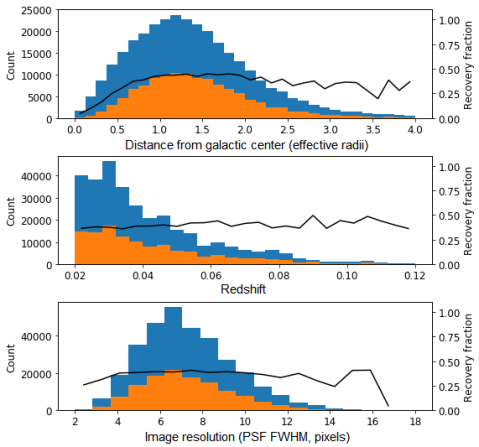 Figure 2: The “recovery curves” for clumps in our sample. On each plot, the height of the blue region measures the number of simulated clumps with a given property, while the orange region’s height measures the number of those simulated clumps that volunteers found and marked. The ratio between these two is called the “recovery fraction”, and it’s displayed as the black line on the plot. The recovery fraction doesn’t change much with redshift (aka distance to the galaxy) or with image resolution. However, it falls dramatically as clumps get closer to the galactic center — which tells us exactly how much harder it is to find clumps that are near the center of a galaxy.

The analysis of volunteers' responses is still going, and more updates will be available soon.