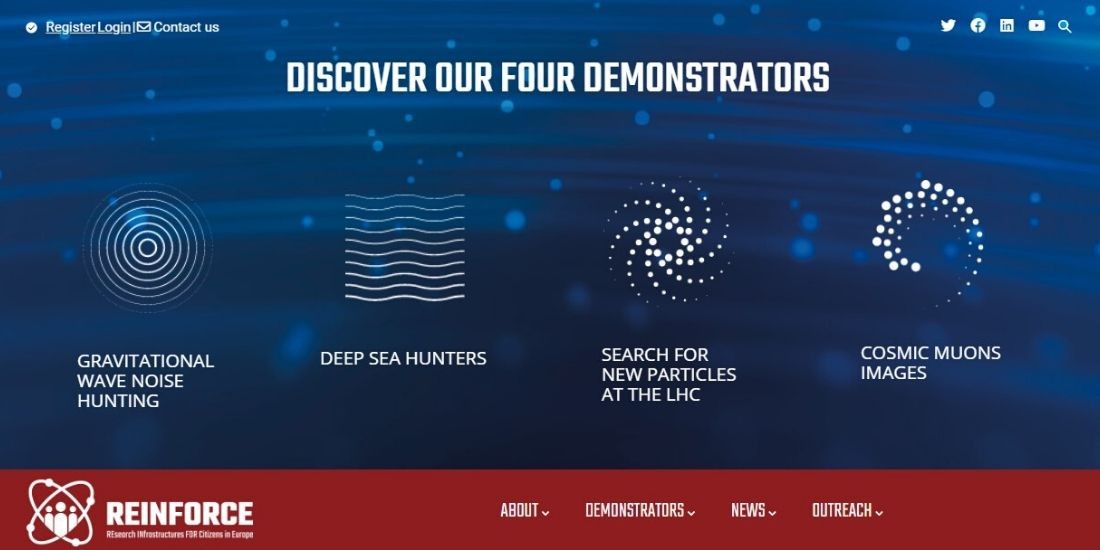 The REINFORCE project (Research Infrastructures FOR Citizens in Europe), supported by the European Union’s Horizon 2020 SWAFS programme, has launched its new fully-developed website. This achievement has been possible thanks to the joint effort of a strong consortium of 11 partners, coordinated by the European Gravitational Observatory.

The platform offers a user-friendly browsing experience for the project’s target groups, including potential citizens scientists which can find information about how to engage with the project, the scientific and research community, policy makers at local, regional, national and EU levels, representatives of industry associations, social innovators and entrepreneurs, and the broad public beyond the project community.

Citizen Engagement in the REINFORCE community

The idea of proactive citizen engagement in science is increasingly attracting institutional interest at the European Union level, as it is proven by the fact that the Joint Research Centre of the European Commission has often dealt with the topic in recent years. In its Science for Policy Report “Citizen Engagement in Science and Policy-Making” released in 2016, the JRC affirms that citizen engagement in science and policy-making can result in “a boost in democratic legitimacy, accountability and transparent governance” and in “improvements for trust building among citizens and institutions”[1]. Encouraging citizens to play an active role in scientific research is paramount not only in the contribution that they can bring to the research, but also in order to fight anti-intellectual beliefs and attitudes within society.

REINFORCE aims to contribute to a significant change in awareness and understanding of basic research and its impact on societal challenges, specifically addressing the issue of the societal impact of Large Research Infrastructures and the potential of citizen science to bridge the gap between frontier research and society, with the goal to create and sustain an active and informed community of citizens who actively participate in scientific endeavours.

REINFORCE’ platform is a unique access point for all relevant updates about the project intended to give a general overview of the work that will be done within the project, to introduce the four Large Scale Citizen Science Projects that will be developed and to offers information on how to get involved.

Providing an intuitive user experience, the website includes many features to easily discover citizen science-related information, articles, blogs, events and training activities, in addition to the project’s results. The dissemination of such outputs has two major objectives:

The website not only has an appealing design and architecture, but it also allows users to register on the platform and get in touch with the REINFORCE team. Indeed, REINFORCE considers dissemination not only as a process of making results available but also of actively working to involve its audiences. Engagement and collaboration are pursued through the design of a strong flow of interactions between the project and its stakeholders.

Who is behind the REINFORCE project?

REINFORCE is carried out thanks to the coordinated effort of a team of 11 partners involving world leading Large Research Infrastructures and research institutions in the fields of frontier Physics, Citizen Science, Science Education, Social Innovation, Policy and Economic Competitiveness. Under the coordination of EGO (IT), the consortium includes the University of Oxford (UK), the Open University (UK), EA (GR), ZSI (AT), IASA (GR), UniPi (IT), CNRS (FR), CONICET (ARG), Lisbon Council (BE) and TRUST-IT Services (ITA).

REINFORCE aims to create a series of cutting-edge citizen science projects on frontier Physics research, in the domains of Gravitational Wave Astronomy, Neutrino Astronomy, High Energy Physics and the interplay of Cosmic Rays with Geoscience and Archaeology. It will rely on the Zooniverse platform, which is the world’s largest platform for online citizen science, supporting more than 100 projects across the sciences and humanities.

For more information about REINFORCE, or to contact the project, you are invited to write to info@reinforceeu.eu or engage through a variety of social media channels: