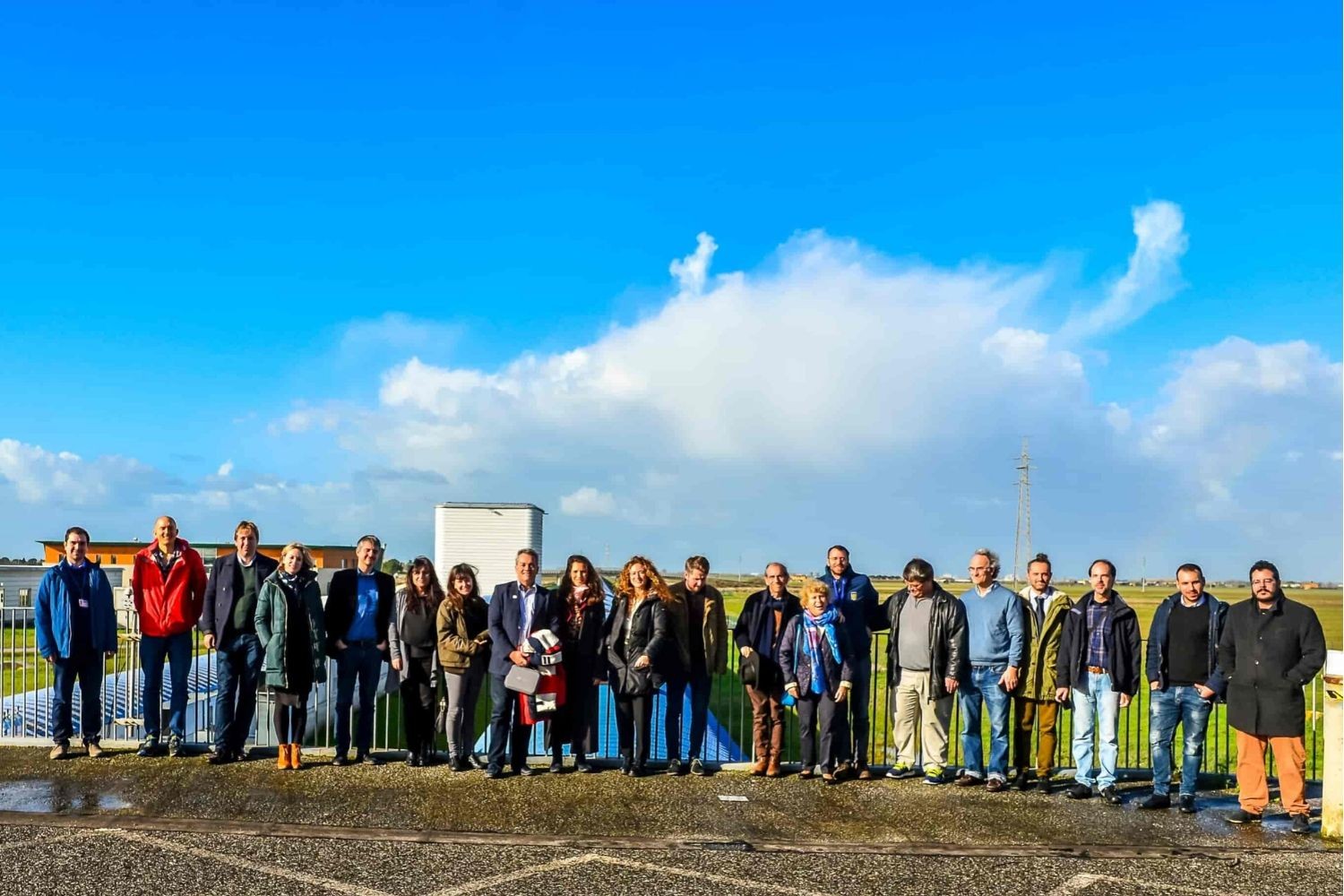 REINFORCE (Research Infrastructures FOR citizens in Europe) Research & Innovation Project, supported by the European Union’s Horizon 2020 SWAFS programme, was officially launched with its kick-off meeting held on 8th-9th December 2019 at the European Gravitational Observatory (EGO), coordinating partner of the project, which is headquartered in the stunning Tuscan hills in Cascina, Pisa (Italy).

Funded under the H2020-SwafS-2018-2020 call entitled “Exploring and supporting citizen science” within the “Science with and for Society” work programme, REINFORCE in its 36 months duration starts in parallel to the establishment of new president of the European Commission, Ursula von der Leyen and her administration that mirrors also the goals of the project where she suggests for “a new push for European democracy”, including a two-year ‘Conference on the Future of Europe’, in which citizens shall “play a leading and active part”.[a] Von der Leyen’s proposal endorses her predecessor’s 2017 resolve to “debate, not dictate”.[b]1
The project will allow citizens’ voices to be heard by strengthening the communication and feedback channels between research and society. Citizens will cooperate with researchers and actively contribute in the development of new knowledge for the needs of science and society, matching the new EC spirit of a meaningful process of EU democratic renewal to build a solid European Civic Space.

Stavros Katsanevas, Director at EGO the coordinating partner, states that the key concept of the project is to Bridge the gap between Science & Society. "We start from the by now established fact”, stated Stavros, “that the Universe can only be understood through the conjunction of many cosmic messenger signals, including of course these of the electromagnetic spectrum but also gravitational waves, neutrinos and cosmic rays, and that the hints of any new particles found in the above studies must and can be tested at accelerator experiments as these done at CERN. Interdisciplinarity is thus the first key word of REINFORCE. Then, we have to acknowledge the fact that these large infrastructures are deeply imbedded in the geosphere and the environment and that the proper understanding of Cosmos as “Geosphere” is a condition sine qua non of the understanding of Cosmos as Universe. The synergies thus of Fundamental Science with Geoscience and Environmental sciences including the Biosphere is then the second key word of REINFORCE. Thirdly, Science, Fundamental or Applied, in order to fulfill its role, has to be properly imbedded in the societal structure, to Cosmos as Society if you wish. That is why our aim is to include a large number of citizens, including senior or visually impaired, in an amphidromous process, where the citizens not only are accompanied to the understanding of science, but also have a scientific impact in return. We are happy to be assisted in this effort by colleagues with large experience in Citizen’s Science, as e.g. the Zooinverse platform, or key sonification experts. Last but not least, we hope that the participation and lessons learned from the slow process of scientific experimentation and understanding, accompanied with everyday management of uncertainly and collective discussion, will promote Critical Thinking to Society at large. We are looking forward also to reinforcing the synergies with both the concluded EU funded H2020 Asterics & 2019 ESCAPE projects to further promote citizen science collaborations” also addressing issues of large science infrastructures.

What Challenges does REINFORCE face in the months ahead?

Citizen science interventions are becoming more and more relevant across all scientific disciplines and the humanities and it can potentially bring a wide variety of benefits to researchers, citizens, policy makers and society across the research and innovation cycle. Nevertheless, there are difficulties setting up citizen science initiatives, for example in terms of choosing the optimum methodologies and ensuring balanced participation of citizens.

Furthermore, questions remain unanswered about the potential of citizen science for society: what is the potential number of citizen scientists and who are they? What are the costs and benefits of citizen science? REINFORCE will aim to answer these questions by engaging more than 100,000 citizens in the research done in Large Research Infrastructures through a participatory design methodology that will take into account the special characteristics of different target groups, their barriers and constrains, their perceptions and biases and their attitudes and knowledge regarding science.

Yiannis Vacondios, Project Officer of REINFORCE and Project Advisor at REA (Research Executive Agency) of the European Commission attended the KO meeting praising the ambitious goals of “creating and sustaining an active and informed community of citizens who actively participate in scientific endeavors” and favorably sees the REINFORCE roadmap playing a relevant role in contributing to Policy considerations for the European Commission.

"Citizen Science – continues Vacondios - can act as a strong catalyst to sensibly reduce Frontier Science and the societal gap. The “Spreading Excellence and Widening Participation” part of Horizon 2020 has been an example to successfully address the pressing challenge of the Research & Innovation divide in Europe, by fully exploiting the potential of Europe's talent pool. REINFORCE, which belongs to the “Science With and For Society” part of Horizon 2020, may go further, by significantly strengthening the interaction and relationship among Researchers and citizens, with a two-fold benefit we look forward to seeing during its implementation.”

The project will create a series of cutting-edge citizen science projects on frontier Physics research, with citizen scientists making a genuine and valued contribution to managing the data avalanche. They will use real and simulated data for analysis, or use instrumentation measuring a wide spectrum of signals from the cosmic ray rates to the variation of geophysical, environmental and biological environments; studying thus their contributions to the environmental noise of large infrastructures, while in parallel developing knowledge on environmental and geophysical parameter monitoring and alerts with global environmental and societal impact. Furthermore, through the use of open data as with dedicated training activities on their use and analysis, citizens will be able to perform their own inquiries, guided and supported by the REINFORCE experts.

The frontier Physics research domains that will be developed by demonstrators to engage citizens are the following:

REINFORCE forges strong connections between successful frontier citizen science projects and amongst 11 partners. EGO (FR/IT/NL), the coordinator of the project, is engaged in the Gravity Spy citizen Science Project through the VIRGO collaboration. The project capitalizes from the experience in frontier citizen science of the University of Oxford (UK) and the Open University (UK), from the contribution in the introduction of RRI in frontier science by EA (GR) and ZSI (AT), from participatory design for online frontier science education developed by IASA (GR) and EA (GR), from the solid tradition in the experimental physics of University of Pisa (IT), from the research activities in the fields of nuclear physics, particle and astroparticle physics carried by CNRS (FR) and the efforts made by CONICET (ARG) to achieve better and multisensorial access to the astronomical data.

The partners Lisbon Council (BE) and TRUST-IT Services (ITA) are responsible for the Awareness-Raising and Communication tasks to maximize visibility of project’s objectives, achievements and results.

For further information about REINFORCE you are invited to use the following channels:

1http://www.epc.eu/en/Publications/The-European-Citizens-Consultations-de... [a] von der Leyen, Ursula, “Opening Statement in the European Parliament’s plenary session by Ursula von der Leyen, Candidate for President of the European Commission”, Strasbourg, 16 July 2019a. [b] Juncker, Jean-Claude, “Speech by President Juncker at the Plenary session of the European Parliament on the debate with the Prime Minister of Ireland, Leo Varadkar, on the Future of Europe”, Strasbourg, 17 January 2018.