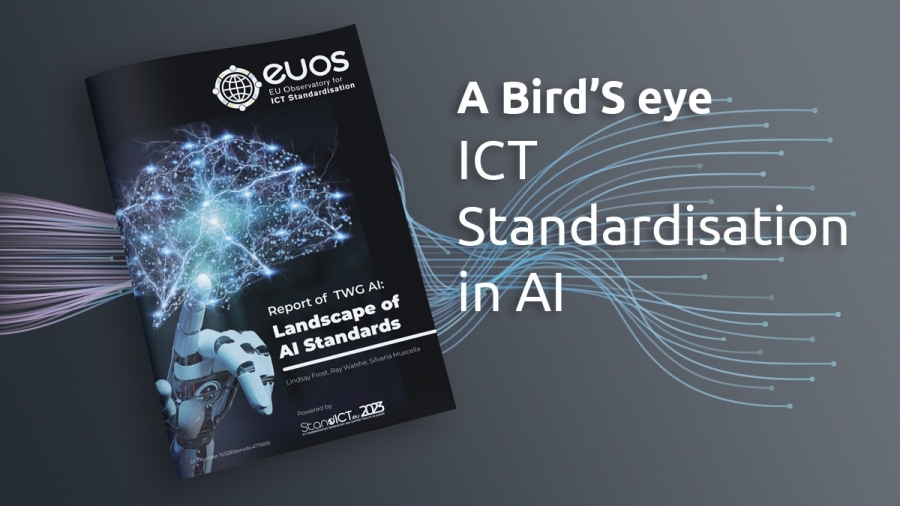 The EU-funded, StandICT.eu 2023  Project, ICT Standardisation Observatory and Support Facility in Europe,  has just published the first of a series of Landscape Reports on ICT standards, Landscape of AI Standards[1] a palpable, go-to reference, providing an overview of the diverse array of global standardisation work underway in Artificial Intelligence and the various organisations behind it. This information will be continuously updated and evolve via the “EUOS – Observatory for ICT Standardisation” a database powered by StandICT.eu 2023 to cover the wide-range of topics identified in the Rolling Plan for ICT Standardisation, and will ultimately result in the release of a dedicated Gaps Analysis Report for each theme.

Landscape of Artificial Intelligence Standards is the fruit of the dedicated Technical Working Group (TWG AI) set-up to harness expert advice and stimulate discussion among SDOs, public bodies, academic institutions and acclaimed specialists to provide an expert overview of documents and activities relevant to standardisation in this field. Ultimately, the TWG AI will pinpoint gaps where additional activity and investment can strengthen Europe’s position and also help create

“a structured dialogue between the EC, Member States and standardisation organisations to stay at the forefront of artificial intelligence through the twin objectives of Europe in adopting a European approach to excellence in AI and a European approach to trust in AI”, as Kilian Gross, the EC’s Head of Unit in Artificial Intelligence at DG Connect, states in his foreword of the Report.

The Report provides an encompassing compilation of standardisation efforts underway in the framework of European SDOs, such as CEN and ETSI, Government, Public Bodies and Agencies, such as the European Commission, the European Data Portal, European Parliament and the HLEG-AI and JRC, Global SDOs and initiatives, such as IEC, IEEE, ISO/IEC, ITU-T, WEF, W3C, as well as non-EU, country-specific contributions including China, Germany, Japan, UK and USA and relevant contributions from other organisations (BDVA, G20, Khronos, OECD, SAE International).

In parallel, StandICT.eu 2023 is providing 3M EURO to fund European ICT experts through a series of (10) Open Calls to participate in international Standardisation Developing Organisations' working groups across the wide-range of topics identified in the EC Rolling Plan for ICT Standardisation..

“This overview provides an easy “look up” regarding what AI standardisation is happening in various organisations and brief information on the organisations themselves. There is no attempt to say here which documents are more fit-for-purpose than others: that will be considered in the next step, in a Gaps Analysis Report. This document is just one possible output from a multi-dimensional database; we look forward to extending, filtering, discussing, mindmapping and collaborating to benefit standards experts and users globally.”

“The ICT Standardization landscape is an every changing, living and dynamic ecosystem of ecosystems where new technologies, tools, techniques, components, products and services are being innovated and disrupted on a constant basis. To remain current, regular standardization landscape research exercises like this AI Landscape Report are crucial to capture the latest state-of-the-art.”

“Having such a thorough and detailed reference document that provides this bird’s eye view on all AI standardisation will allow us to provide our Standardisation Developing Organisations SDOs and Funding Agencies with the mechanisms to help intertwine efforts collectively which is the purpose of the StandICT.eu ecosystem “

Dip into the Report [2] or join one of the Technical Working Groups to make your contribution!

Apply to one of our Open Calls to fund your standardisation work!

For further information, please reach out at info@standICT.eu

StandICT.eu 2023 releases the first in a series of timely Landscape Reports on Standardisation advancements, kick starting with Artificial Intelligence (AI), with another 5 in the pipeline…